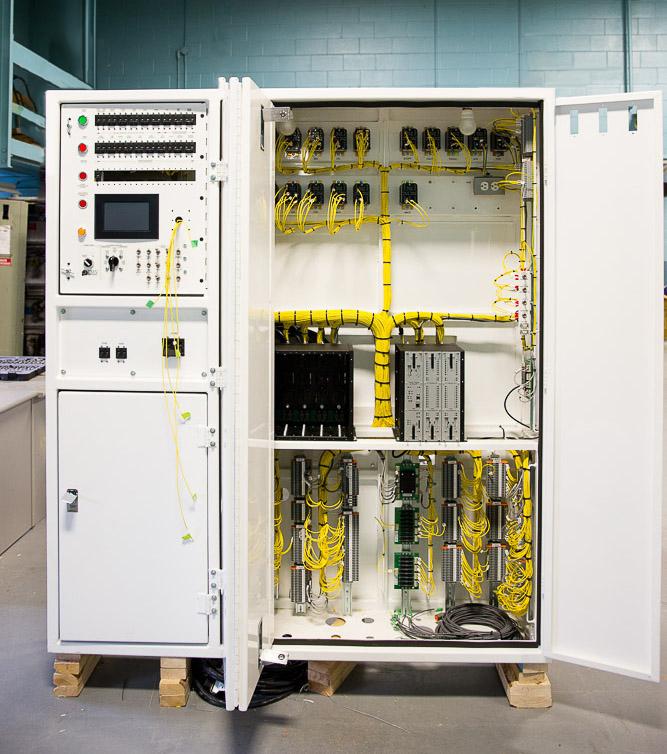 In June, 2013, TMV undertook the assignment to design and develop a high voltage electrical cabinet for Norfolk Southern.

Norfolk Southern approached TMV to assist with a modernization initiative of a GE Dash 8 locomotive.
Dash 8s were developed  in the 1980’s to replace the Dash 7s. These newer locomotives were the first to include a Microprocessor-controlled engine control unit.   Looking back, it seems fitting that TMV’s first electrical cabinet would be fitted for a Dash 8, to encase TMV’s banner product: The TECU control system.

TECU’s had been connecting to electrical cabinets since 2005, but the prospect of developing a cabinet of TMV’s own was an attractive challenge.  Weeks and months of pouring over schematics, making measurements, drawing diagrams and ordering parts brought development into the next phase: putting it all together.    With an empty cabinet shell and hundreds of feet of wire to work with, TMV’s production team began the assembly process.   From heavy duty components like high-voltage electrical contactors, to intricate, circuit-based parts like voltage panels, something noticeable was starting to materialize.

Before long, orders came in for a second and third cabinet.  This added to the production team’s workload, and as more parts came in, TMV reacted accordingly to develop greater efficiencies by streamlining and refining the process.

Fast forward to today:  TMV has produced 64 cabinets since June, 2013.  That averages out to approximately 1 cabinet per month.   Since the Dash 8, TMV has done cabinets for dozens of different types of locomotives.